We’re still catching up with all of Bananas Bunny’s adventures. Here he and his friends Seb, Darren, and David tackle Tryfan. Seb tells the story.

Bunny began the day in the carpark by the A55. He was instantly in awe of the massive fin of angry looking rock which awaited him. He had been told that there was no messing around with Tryfan, and that the hands on scrambling action started only 400 yards from the carpark.

This turned out to be no exaggeration, as less than 400 yards from the carpark he was faced with what amounted to a cliff which he had to climb.

Other people seemed to be doing it, so Bunny decided that it would be fine. What could possibly go wrong?

At the top of what was soon to become known as “The cliff of death” Bunny was exhausted, and his friend Darren looked confused and terrified. 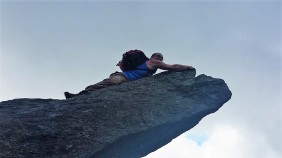 After the terror had subsided a little, they came across a landmark called “The Cannon Stone”. What’s hard to tell from the photo is that The Cannon Stone juts out over a yawning precipice, and was seriously wet and slippery when we were playing on it. 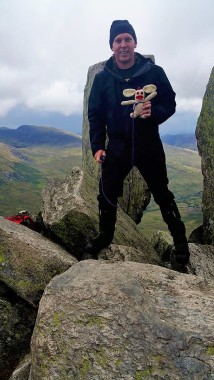 Bunny needed to stop for a breather and some hard earned Jelly Blobs after his climb. Look how small the cars look in the distance, and this just over half way.

Darren, on the other hand, needed to stop for a hard earned selfie.

A few establishing shots follow. These were taken from the top of The North Tower, where Seb received a phonecall from his Dad in New Zealand. Which was odd. 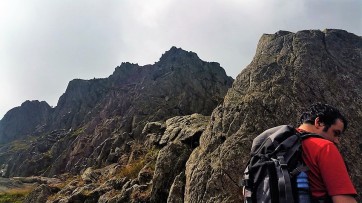 The North Tower is an imposing spike of rock which juts out about 900 metres in the air.

Another view from the North Tower.

And another stunning view. 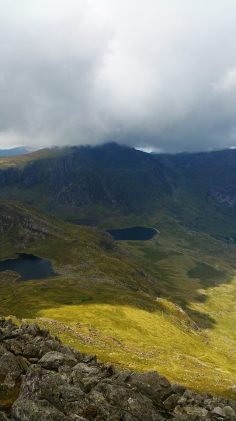 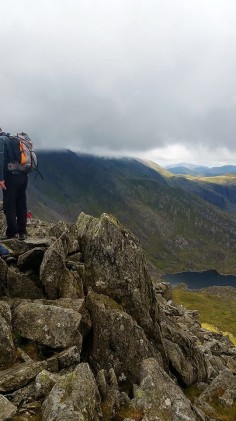 The North Tower from a little further on. 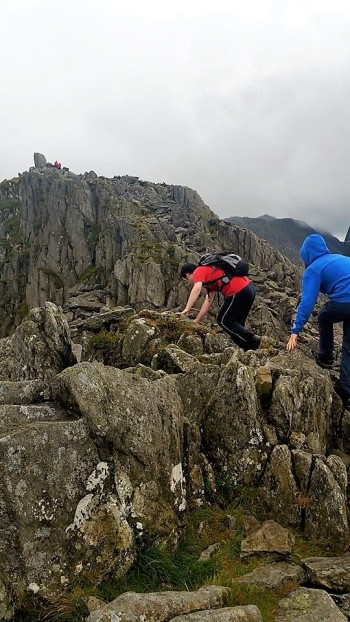 David looks down at the precipice which separates The North Tower from Tryfan summit. 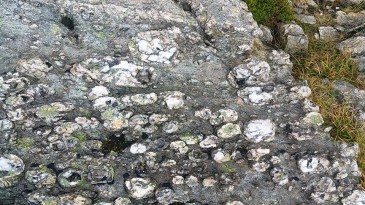 Tryfan was covered in these weird rocks. A geography expert friend helpfully identified them as “some rocks”. He eventually elaborated – they’re quartz.

t’s hard to capture a perspective of height from the mountains, but needless to say Tryfan doesn’t deal well with you making mistakes.

Everything is so high and pointy in Snowdonia.

When you finally hit the summit of Tryfan, there are two massive boulders called Adam and Eve. It is traditional to jump between them. That’s a several hundred metre vertical drop behind by the way – it doesn’t do you any good to miss.

Bunny’s bravery is incredible. He jumps between Adam and Eve without a thought to his safety, or the safety of others.

His landing is immaculate though, and he has earned himself the freedom of Tryfan. These photos of Bunny’s jump were captured by a very helpful Ogwen Valley Mountain Rescue guy who was hanging around at the summit waiting for the inevitable callouts of the day. Seb put all his change into his collection pot by way of a thank you.

Thanks to OVMRO for your good humour and help today in recording Bunny’s death-defying leap between the Adam and Eve stones at the top of Tryfan! You people are great!

Thank you too, to our intrepid adventurers BB, Seb, Darren and David for the stunning pics. We’re glad you’re all back in one piece!