We’re still catching up with Bananas Bunny and friends. This story is from August, when BB, Seb, FairyJo, and Meeko Marmot visited the Lake District again. Over to Seb…

Bunny managed to persuade us to go adventuring in The Lake District, climbing the East side of the Kentmere Horseshoe (which we had to abandon a few months ago due to bad weather)

To top it off, we then wild camped in a secluded gully beneath Harter Fell. We were the only human beings (and bunnies and marmots) in the area, and if it hadn’t been for all the low clouds which piled in just as it got dark we’d have had a lovely starry night with no light pollution. Oh well…

Click through on the pics below to read more of the story.

On the way up from Sadgill (what a horrible name for a place!) we were excited and yet to be exhausted by the constant grind of ascent.

FairyJo hates scrambling with a passion, so when we were almost immediately presented with bit of minor hands-on scrambling she nearly beat poor Bananas Bunny with a walking pole.

Bananas Bunny and Meeko Marmot fought for superiority over the first summit of Shipman Knotts. It was very windy, and made Bananas Bunny’s ears flap around alarmingly.

Meeko Marmot got the upper hand on the summit cairn of Kentmere Pike and Bananas Bunny swore revenge!

To prevent any further bother, we held both of them for the summit cairn of Harter Fell… Bunny has got himself very muddy and will need to go in the wash later.* 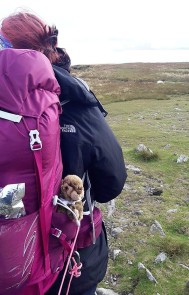 Meeko likes to sit in Jo’s rucksack and intimidate passers-by.

With the walking done for the day, we setup camp in a little gully just off Harter Fell. There wasn’t another human being in sight, which was nice. We had our own little private stream, and all the sheep we could eat.

We had a lovely view of our temporary home from some rocks above, and predictably we sat and drank wine from little metal cups while surveying our home for the night.

That little mound at the top is called “Adam’s Seat” FairyJo wanted Seb to photograph it so she could point it out to somebody at work.

We had planned to sit and watch the last vestiges of the Perseid meteors, but then the low cloud began to roll in. 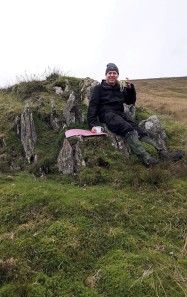 Which didn’t stop Seb sitting on his little throne and demanding more wine.

What did stop us temporarily was rain. Bunny and Meeko retreated to the tent to make a nuisance of themselves while we huddled inside nice and dry.

The rain naffed off fairly quickly, but was replaced by fog and low cloud…

…Which gradually got worse… 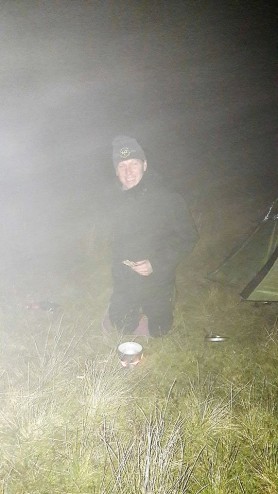 …until eventually we gave up on meteors and resorted to whiskey-infused coffee. 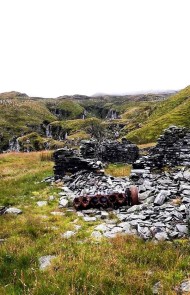 The next morning we got up early, and had the Lake District to ourselves. This section looked a bit like Lord of the Rings. But with rusting machinery. 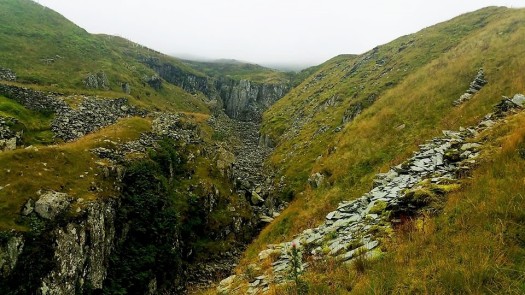 The Dwarves have clearly been at work here.

You are all very intrepid! Some of us lazier folks here at Monster HQ are quite glad to be tucked up in the lair, looking at these pictures on the sofa with the fire burning (courtesy of the hearth dragon). As always, huge thanks to Seb and FairyJo for sharing your story and photos!

And there’s still more to come from BB…