Bananas Bunny has been back to the Lake District for even more adventurous climbing with his friends Seb, Lisa and Darren. Over to Seb for the story.

Bunny was very excited about his trip up Helvellyn. Should he survive, he would enter the record books as the first crochet bunny to summit the mountain without carrying a spare pair of underwear.

After puffing and panting his way up England’s 3rd tallest mountain, Bunny was exhausted, and took a rest on the summit cairn… The low cloud blocked out the horrific precipice of death about half a metre behind him.

The view down from Helvellyn onto Swirral Edge was quite unnerving… All pointy teeth sticking out of the cloud as the earth dropped away into oblivion… It didn’t fill us with confidence.

Lisa looks on in abject horror mouthing the words “You really want me to go down that! Is it safe?” 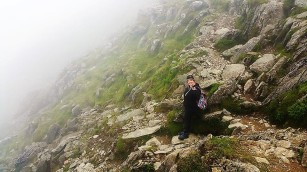 Lisa soon cheered up when we explained to her that only a couple of people had died recently on Swirral Edge, and that with competent mountaineers like us to guide her it was bound to end well. 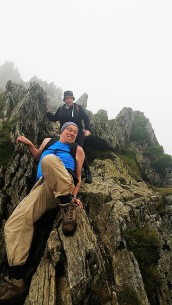 Darren immediately proved to Lisa how safe the descent of Swirral Edge was, and adopted his confident face. 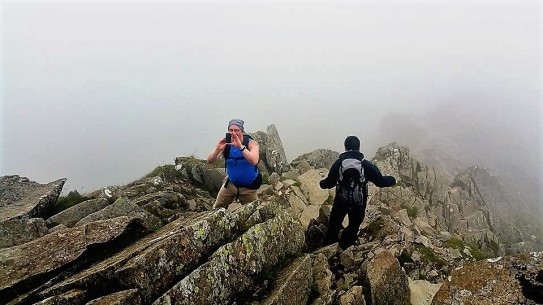 I was trying to take a photo which reflected the seriousness, gravity, and death-defying manliness of Swirral Edge… But the group of small children gleefully skipping up it kind of ruined the effect I was going for.

Once the cloud burned away, Helvellyn revealed its stunning east face…

…and we could see the fun times which awaited us in Striding Edge later that afternoon.

A quick trip to the top of Catstye Cam on the way over. It was quite windy. Bunny’s ears got majestically whipped around.

Lisa summitting Helvellyn for the second time that day, after braving the bowel-loosening Striding Edge.

From this angle you can see the full stretch of the arête. Such fun!

Wow! Well done, all. That looks like quite the climb! We’re loving the spectacular views of the Lake District from the comfort of the sofas at Monster HQ.