We’re still catching up with all of Bananas Bunny‘s adventures at Monster HQ. On the 16th and 17th July, he and his friends Seb and Jo went to the Dark Peaks and the Lake District. Their trip features mountains, waterfalls, bogs and deserted mine shafts.

Please bear in mind that Seb’s imagination has been warped by a liftime of LARPing, so you might need to take some of his captions with a pinch of salt. Over to Seb…

Jo picked this weekend’s activities since she had an unusual whole weekend off. I was a little surprised that she chose to climb Kinder Scout in the Dark Peaks on Saturday and then Catbells in the Lake District on Sunday, but never being one to argue with getting high we set off for a weekend mountaineering, with Bunny leading the way of course.

Saturday started misty and murky as we made our way up Crowden Clough which ascends Kinder Scout. Bunny was soggy but excited to be climbing the highest mountain in The Peak District.

As the climb got steeper, we left the main path and started the scramble up the clough, which apparently is what those weirdos in the Peak District call a Ghyll.

As Bunny rested innocently, he became aware of a lurking evil presence somewhere nearby. Something dark and malevolent had designs upon his ears, he just knew it. (Jo just wants to give Bunny ear rubs, Seb. – Monster HQ.)

Seb adopted his usual position a long way ahead. He claims this is something to do with ‘scouting out the path’.

More likely this has something to do with his deisre to pretend to be some kind of religious figure on every appropriate rock he comes across.

The river ran dark. Seb claimed this was peat in the water, but blood from human or bunny sacrifices further up the river seemed a more likely explanation.

Finally, our adventurers’ target came into sight – a waterfall which Seb had assured everyone was safe and fun. Jo and Bunny were suspicious from the start, but went along with him. It turned out to be a traumatic slippery scramble which required ropes at one point. Seb is no longer allowed to suggest ideas without approval.

Having survived the waterfall of death, and hit the summit plateau of Kinder Scout, Seb couldn’t resist climbing Pym’s Chair in the hope that there was Pimms at the top. There wasn’t. He was sad.

The summit cairn of Kinder Scout is disappointingly unimpressive, and surprisingly difficult to find.

Unlike the trig point of Kinder Low, which is obvious from miles away, and requires that you only fall into 3 bogs on the way to it.

FairyJo was delighted to have survived the bogs of drowning, so much so that she braved climbing up onto the rock it sits on to hug it.

Bunny chose this moment to attempt to sacrifice Seb on a convenient sacrificial altar. 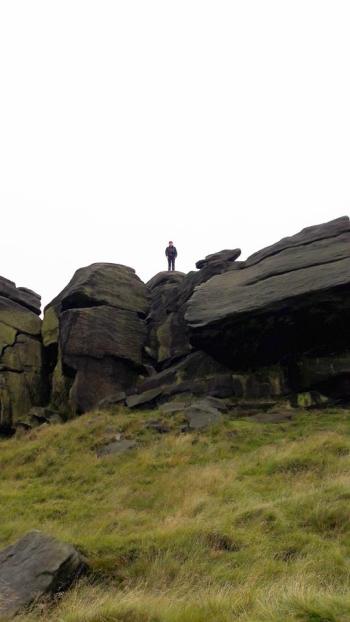 Seb really can’t help himself when it comes to getting high.

And so Saturday began with a climb up Catbells in the Lake District. Despite its name, and to the disappointment of all involved, it features neither cats nor bells.

From the safety of a position a little further down the south face from the summit of Catbells Bunny surveyed his new domain.

He also vocalised his disgust at the middle-class-ish-ness of eating sushi while climbing fells. 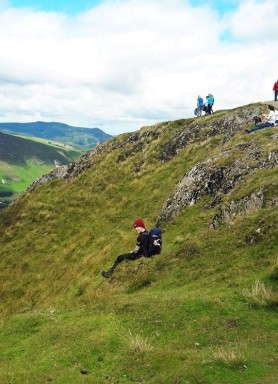 As punishment, Seb was forced to sit on his naughty step on the edge of a cliff.

On the way down, Seb spotted the entrance to an old mine shaft, which The National Trust had made no effort whatsoever to secure. We explored quite a long way down it.

We hadn’t found lurking monsters yet, but we knew they were somewhere down there.To get a proper photo, both Seb and Jo had to turn off their head torches. Imagine our surprise when the resulting photo DIDN’T have some kind of horrific beast just about to tear Seb apart in the background. We both genuinely expected it!

From all at Monster HQ – we’re very glad to see that you’re all still alive!

We can’t show Seb’s amazing 360° picture of Catbells summit here, but if you visit Bananas’ FB page you can take a look. (Warning – BB found something non-PG rated on one summit.)

More epic adventures with Seb, Jo and Bananas in the wilds of the English landscape are on the way.